It took Bruce Springsteen a while to get his head around the concept of fatherhood.

An often contentious relationship with his own dad hardwired the Boss to keep domesticity at arm’s length.

Patti Scialfa of Deal changed that, said Springsteen on the Monday, March 29 episode of  “Renegades: Born in the USA” podcast with Barack Obama on Spotify.

Springsteen and Scialfa now have three grown children. The birth of their first, Evan in 1990, strengthened their relationship and created a family bond.

They took baby steps to making a baby.

“She says, ‘It’s OK if we take it a day at a time.’ And so we did,” said Springsteen on the episode, titled “Finding Home: Fatherhood.”  “I came home one night. I think I was away for a few days and walked in the room. She said, ‘Oh! By the way, I’m pregnant.’ ”

There was silence in the room.

“We’re on the bed. She tells me,” Springsteen said. “I look away and she doesn’t know exactly how I’m going to respond, but there’s a mirror on the inside of the door and she says, ‘Hey, I just saw you smile.’ That was it! Many smiles later here we sit, you know?  My boy is about to be 30 years old.”

Evan Springsteen, now 30, is a music and audio producer; Jessica Springsteen, 29, is a champion equestrian rider who’s a potential Olympic athlete; and Sam Springsteen, 27, is a Jersey City fireman.

“The problem that I had was I didn’t trust myself for a long, long, long time with someone else’s feelings,” Springsteen said. “All you have is faith to go on. If you take a baby step, you’ll be able to take another one.

“Where did that faith come from? It comes out of the love in your life. My case: Patti was an enormous source of love in my life and a deep well of faith for me. Gave me the faith in myself to risk parts of myself that I’d never risked before and say, ‘Hey, I think I’m there at a place where I can hold this down and let the chips fall where they may.’

“If it all crumbles and comes apart and winds up in ruin, then that’s what happened. You know? But if it doesn’t, what if it doesn’t? Then what am I going to do?  What if suddenly I find myself with a family and with a long-standing love? Who am I then?”

More:Nick Jonas of Jonas Brothers: I want to play Bruce Springsteen in a movie

Springsteen was previously married to actress Julianne Phillips from 1985 to ’89. Springsteen and Scialfa, a member of the E Street Band, married in 1991.

“All of these things came into question way before being a dad, and Patti and I, we were just together and we were just loving, loving each other,” Springsteen said. “That was our business of the day: To build something. I’m 35, 36 years old (when Springsteen and Scialfa began their relationship). That’s getting up there, you know? And deep inside I want to have a family, and I felt like I got to be honest with her. I said, ‘Patti, I don’t know if I can make this.’ And she said, ‘Well, we’ll see.’ ”

“Renegades: Born in the USA” is an eight-part spoken journey from Barack and Michelle Obama’s Higher Ground Productions, where Obama and Springsteen delve into race, fatherhood, marriage, music and the future of America, according to Spotify. It was recorded at Springsteen’s home in Colts Neck in the summer.

Barack and Michelle Obama have two children, Malia, 22, and Sasha,

The series debuted on Feb. 22. 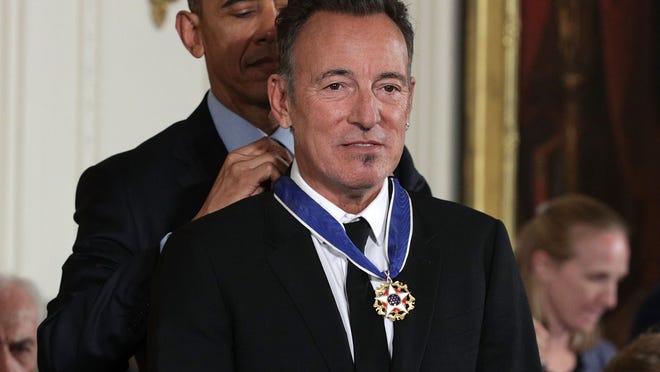 Subscribe to app.com for the latest on Bruce Springsteen and the Jersey music scene.